Winter got you down? Try a trip to Florida. 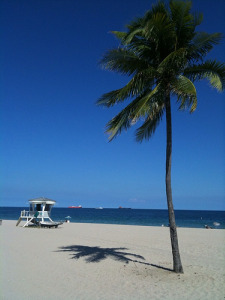 We’ve all heard of “snowbirds” who live in the northern part of the United States but flock to Florida in the winter to avoid the coldest weather. And, to be fair, we’ve all probably mocked those people a little bit as fair weather friends – but it’s not hard to understand why they’d do what they do. After all, if you liked your life in Wisconsin but were tired of shoveling snow in winter, wouldn’t you want to head to Florida for a few months every year, too?

The thing is, if you’re in the camp who mocks the snowbirds – or you’re not quite at the point where you can afford a vacation home or escape to a different state altogether for a few months out of every single year, then the next best thing is a wintertime trip to Florida to soak up a little sun before heading back to the cold.

Most people would probably gravitate toward places like Miami or Orlando for their trip, and both of those options are fine – but if you’re looking for a better deal on airfare, you might be more apt to find it on flights to Fort Lauderdale instead. Fort Lauderdale’s airport is actually considered a secondary airport for Miami, since it’s only 20 miles from Miami and favored by many budget airlines in the US, so it’s absolutely worth looking at flights into FLL even if you’re planning to spend most of your trip in Miami.

If you don’t mind skipping Miami, however, Fort Lauderdale is a good option for staying in as well. It happens to be one of the state’s many port cities where cruise lines depart, so there’s no shortage of hotels in Fort Lauderdale to help accommodate all the cruise folks staying the night before their big trip. And if you time it right, you can get a great deal by booking when there aren’t as many cruises leaving Fort Lauderdale when occupancy rates tend to be lower. Plus, hotel rates in Fort Lauderdale are often lower overall than in nearby Miami.

Still, Miami has its perks – many of which you won’t find in Fort Lauderdale. A big perk in early 2010 is that Miami is hosting the Super Bowl, which will draw even more travelers to the city than usual. The game is in early February, so if you haven’t already booked your trip you might want to start thinking about it – yes, even before you know what teams are playing. The best prices on hotel rooms in Miami are likely to go fast (if they’re not gone already), so you may be forced back into looking at those hotels in nearby Fort Lauderdale instead. And at some point the only way you’ll get into the game is by forking over a huge amount of money to a scalper or buying one of the many Super Bowl travel packages that get advertised (some of which are a deal, but some of which really aren’t).

Hey, if your team doesn’t make it to the big game, you can always enjoy a sunny vacation in February… Or sell your vacation to someone else at a handsome profit!