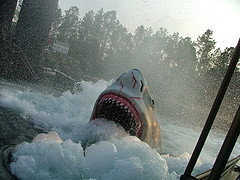 When making the rounds to Orlando based themes parks, Universal Studios is a must see. All though its not quite as cool as visiting the real Universal Studios in California, its still worth visiting. The park is full of rides, roller coasters, shows, tours, and other attractions. The Universal Studios theme park is easily a full days worth of adventure for couples or families with older children. It is also a nice change of pace from the Magic Kingdom and Sea World.

About the Park
As one would imagine, Universal Studios is filled with attractions based around the movie industry. Some of the most popular attractions at the park include Men in Black, Revenge of the Mummy, Shrek 4-D, and Terminator 2 3-D: Battle Across Time. These attractions are an assault on the senses and will get your blood pumping.

Visitors to the park with younger children may want to visit some of the more family friendly attractions such as Shrek 4-D. This show features cool special effects like water spritzers, pneumatic motion simulator seats, and “OgreVision” glasses. Another cool feature of this attraction is it features lot of little videos and animatronics along the line to keep kids from going stir crazy in line. Other cool family oriented things include the Jimmy Neutron’s Nicktoon Blast and ET.

Costs
Dayliy ticket prices to Universal Studios can be a bit hard to swallow. If you are planning a several day long vacation, you might be better off buying a multi-park package to save some money.

Current prices are as follows:

From I-4 Eastbound (Disney/Lake Buena Vista/Kissimmee):
Take I-4 East to exit 75A
Follow the signs to Universal Orlando’s main parking garage or to one of the three (3) resort hotels

From I-4 Westbound (Downtown Orlando):
Take I-4 West to exit 74B
Follow the signs to Universal Orlando’s main parking garage or to one of the three (3) resort hotels