Many divers, both professional and novice flock to the Florida Keys to diver year round. The Florida Keys have a rather large concentration of amazing dive sports scattered all around the Keys. While there are many great ones to chose from, the list below is some of the most popular dive sports in the Keys. If you don’t dive and are too afraid to learn don’t worry. A number of the spots on this list can also be enjoyed by snorkeling! 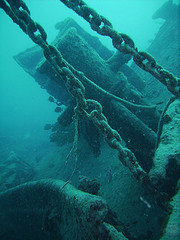 Seven miles southwest of Key West, Sand Key is marked by a 110-foot tall iron lighthouse. It is home to many different species of fish and coral. The reefs extend for more than 10 miles, with wide variations in the depth of the water.

Kedge Ledge
Notable for two anchors lost from sailing ships in the 19th century and now completely encrusted with coral, this ledge is not marked, so only a few dive boat companies visit it. The water is about 30 feet deep here.

Ten-Fathom Ledge
Four and a half miles west-southwest of the Sand Key lighthouse, this is honeycombed with coral caves, overhangs, and ledges. The water is remarkably clear.

Joe’s Tug
A tugboat that sank in 65 feet of water in 1986, Joe’s Tug is now one of the most popular dive sites in the keys. Divers can swim into the wreck and visit with Elvis, a jewfish, who lives there. 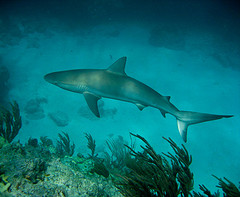 Established in 1990 to protect the marine ecosystem of the Florida Keys, Looe Key shelters a multitude of varieties of fish, coral, sea grasses, and other aquatic life. All activities are strictly regulated here to protect the ecosystem, but divers are welcome as long as they look and don’t touch.

Adolphus Busch, Sr.
One of a number of ships that have been deliberately sunk in the Keys to create artificial reefs and thus encourage marine life, the Adolphus Busch, Sr. is a 210-foot-long freighter that sits upright in 108 feet of water. 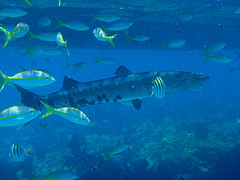 One of the largest reefs in the Middle Keys, Sombrero Reef is marked by a 142-foot high lighthouse. The reef supports one of the most varied group of corals in all of the Keys. Since it is a Sanctuary Preservation Area (SPA), all activities there are strictly regulated. The waters are shallow, and thus suitable for divers of all skill levels.

The Thunderbolt
This ship, which was intentionally sunk, is four miles south of Marathon in 120 feet of water. Divers can swim around inside the wreck, which is considered one of the safer ships to enter in the Keys. Schools of grouper and barracudas live in and around the wreck.

Delta Shoals
This site has several wrecked ships on it, in water between six and 25 feet deep. Coral fingers and soft corals populate it, as do many species of fish. The shoals extend about half a mile, with many coral caves. Relics from the wrecks can still be found in the sand and grass flats.
Islamorada

Alligator Reef
The U.S.S. Alligator sank here in the 19th century, creating the basis of the reef. Barracuda, grouper, and a few sharks make the reef their home. The reef is six miles south-southwest of Windley Key. A 136-foot tall lighthouse marks the spot.

Davis Reef
Populated by hordes of green morays, grunts, and schoolmaster snappers, this reef is four miles offshore of Plantation Key. The water ranges in depth from 18 to 25 feet. The Eel Hole on the reef is marked by a small statue of the Buddha.

The Eagle
A 269-foot freighter that was deliberately sunk four miles offshore from Islamorada, this wreck sits in water that ranges from 70 to 100 feet deep. When it was sunk, holes were cut into one side of the ship to make the interior accessible, and safe, for divers to explore, but those good intentions were thwarted when the ship turned over onto that side. Consequently, divers are advised not to enter the wreck unless they take an expert guide along with them. 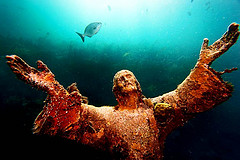 Three shipwrecks, the Civil War Wreck, the City of Washington, and the Towanda, lie on the sea bed at this dive site. It is populated by tall coral and grunts, angelfish, turtles, and barracudas. The water is unusually clear.

Statue of Christ of the Abyss
Standing upright in 25 feet of water on Key Largo Dry Rocks, the statue was sculpted by Guido Galletti, and donated to John Pennekamp Coral Reef Park in 1966. The uplifted hands of the statue are only about 10 feet below the surface, so both divers and snorkelers can get a good look at it.

Molasses Reef
One of the most popular dive sites in the Florida Keys, Molasses Reef is a long collection of reefs inhabited by brain coral and star coral. Some parts of the reef touch the surface of the water. Many species of fish, lobsters and crabs, turtles, and sharks also make their homes there. Depths range from 10 to 70 feet and visibility is excellent. Molasses Reef e is considered one of the “don’t miss” dive sites in the Keys.