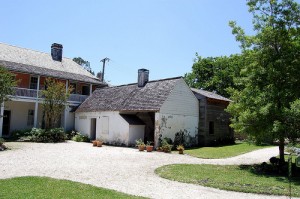 The Ximenez-Fatio House Museum is a historic property that is located in the Old Town area of St. Augustine, Florida. Though the grounds of the museum date back to the 1572 original town plan of St. Augustine, the house itself was erected in 1798.

The Ximenez-Fatio House Museum earns its name from two of its previous owners: Andres Ximenez and Louisa Fatio. Ximenez had the house built and operated it as both a home and a general store. The following owner turned the home into a boarding house, a role that it would hold through its purchase by Louisa Fatio.

The grounds were purchased by the National Society of the Colonial Dames of America in the State of Florida in 1939 and was turned into a museum in 1946.

The Ximenez-Fatio House Museum consists of the house and detached kitchen, as well as an early 19th century wash house and a visitor center. Some of the rooms of the house included with the tour are the dining room, parlors, a family room, and several rooms that have been recreated to display the décor of persons who might have rented the rooms at that time. These rooms consist of the artillery officer’s room, the artist’s room, the captain’s room, the doctor’s room, the ‘frail lady’s’ room, the owner’s bedroom, and a room being cleaned. Each room is outfitted with restored furnishings of the area as well as historical objects.

Specific historical items of interest that appear throughout the rooms consist of several spittoons located in several rooms; a punkah, a fan meant to keep away flying insects, in the dining room; chamber pots under the beds; a cellaret, or portable cabinet for wine; and a bed wrench, used to tighten the ropes on bedsteads.

Tourists can also visit the detached kitchen, which is the only original free standing kitchen in St. Augustine. Much as the other rooms of the house, the kitchen is furnished with pieces from days gone by, such as a beehive oven and a dry sink. A wash house that was reconstructed to reflect what might have existed at the turn of the 20th century is also open to visitors.

The museum’s visitor center gives tourists more information about the Ximenez-Fatio House. It includes an exhibition room with interactive touch screens as well as a short video presentation. At the Museum Store, visitors can find a great number of items, from printed materials to reproductions of a Caravaca cross found onsite during an archaeological dig, that allow them to take a bit of the Ximenez-Fatio House home with them.

The Ximenez-Fatio House Museum is close to many of the other attractions in St. Augustine, making it an easy to find and enjoyable destination. Visitors should note that the museum is located on Aviles Street, which is pedestrian only. Those driving can find several parking locations nearby.

The museum and grounds are well shaded, but visitors should be prepared for hot days and for spending a great deal of time on their feet, thus they should wear comfortable shoes and should dress for hot, humid weather during the peak tourist season. High heels are not allowed in the buildings.

The museum does not allow backpacks or large bags to be carried throughout the rooms, though tourists can leave these items at the Visitor Center. The museum will also ask that cell phones and cameras not be used while touring the facility. Any food or drinks will also need to be discarded prior to entering any of the buildings.