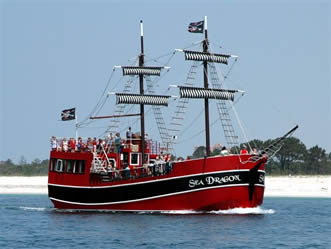 Travelers to Panama City Beach may be reminded of that ‘other’ Florida hotspot at some of the popular local attractions in this west coast destination. For example, Walt Disney Pictures brought back the popularity of the Pirate Adventure with the Pirates of the Caribbean series and its ‘why is the rum always gone’ Capn’ Jack. The Pirates of the Caribbean ride has been around since 1973 and was the last ride that Walt Disney himself assisted in designing. But the ride, with all its animatronics and indoor ambience, do nothing to capture the essence of Real Pirates. Orlando, Florida may have the Pirate Adventure singing dinner and the Pirates of the Caribbean yohohum ride, but The Sea Dragon Pirate Cruise has what those other things don’t have: Real Pirates, on a Real boat, on Real Water…Really! Captain Phil is a real pirate and invites those brave enough to come aboard to make a reservation when traveling to the Panama City Beach Region.

After partaking of the necessities (like the rum punch) water gun battles, sword fighting and other piratey party fun ensues to festive music. “Pirates are so much like large children at times,” sayeth Raven the Real Parrot…okay I’m just making that up. But what is a pirate party without a high brow parrot in a Real Panama City Pirate Ship? This bears some perusal.

Panama City Beach is a hot spot to visit for spring breakers and summer vacationers. Upscale resorts like the Bay Point Marriot Golf Resort and Spa and the Boardwalk Beach Resort are only a small sampling of beachfront properties that vacationers could make their home port while exploring the more adventurous side of Panama City. People staying at these properties can take advantage of outdoor activities such as sailing and kayaking. The Bay Point offers complimentary cruises to Shell Island to hunt for treasures. The Sea Dragon comes within close range of this local natural wonder!

Getting to Panama City Beach will be as easy as flying into the Panama City-Bay International Airport, which is slated to be completed in 2010. This new airport is the first airport to be built in the United States since 9/11. Travel and tourism increases to the region have spurred enough growth to justify the expenditures for a new airport. Pirate adventurers will definitely appreciate the larger airport and increased ease of travel to this west coast jewel with pristine beaches, family friendly explorations, and hot night spots. Visitors of all ages can enjoy the Real Pirate Cruise with the Sea Dragon Pirates. Panama City is the affordable vacation destination gem that easily tops the list of any family’s getaway plans. Visitors seeking white beaches, pirate adventure, and first class accommodations should look no farther than this coastal Floridian town.

For some people, vacations are about tranquility and relaxation, wide open skies and crystal blue seas. Then there are those who seek a little bit of spice and uniqueness to add to their leisure time. Panama City boasts all of these things plus some homegrown Pirates that want to make your play time FUN!