Things to Do in Tampa: Swimming with Manatees 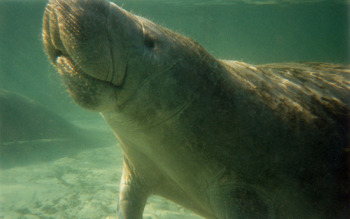 “Um, honey,” my husband said, wide-eyed, “if your hands are right there, what’s holding on to my leg?”

We were snorkeling in the cold, 4-foot deep murky water of the Crystal River, about an hour and half north of Tampa. We’d come to swim with manatees, the adorably-ugly sea cows that can grow up to 13 feet long and weigh 3000 pounds.

We’d arrived at 6am, donned wetsuits and climbed aboard a pontoon boat with five other swimmers. We’d listened to Captain Mike as he explained the rules and regulations of swimming with manatees, and as he’d warned us that it might take hours before we found a manatee (if we found one at all) and that once we did, it might not be interested in swimming with us.

But we had found one. Captain Mike saw the telltale air bubbles after only about 20 minutes out on the water, and so we’d all put on our snorkel marks and gently dipped into the frigid water, bobbing on the surface with our faces submerged. Only a few minutes passed before I floated over to Dan and he realized that it wasn’t me clinging tightly to his thigh.

I put my face back in the cloudy water and peered into the green haze. My hands disappeared out in front of me, and then came into contact with a dark grey, slightly slimy mass. I let out a soft underwater shriek as I realized the mysterious weight around Dan’s leg was a manatee.

My excitement caught the attention of the other swimmers, who all came over to investigate. The manatee shifted position, laying her body along my husband’s lower back, pushing her nose into his armpit. Captain Mike peered over the railing of the boat and laughed. “She’s trying to suckle you,” he said, as Dan’s cheeks flamed red. He explained that the manatee was a young calf, and then pointed out her mother, who was swimming just a few feet from the boat.

While the other swimmers made their way over to play with the mama manatee, I stayed with Dan and his new friend, who ended up clinging to his leg for over 45 minutes, alternating resting her head on his back, snuffling hot manatee breath on his neck, and setting her head gently in his lap. As she floated there, I stroked her slick belly and ran my hands over her back, tracing the deep white scars where propellers had left their marks.

Later Captain Mike would tell us that while manatees are often very playful and appear to enjoy human interaction, he’d never seen one so attracted to a single person. He couldn’t explain why, but it seemed this particular manatee just seemed to really like Dan. As the other swimmers oohed and aahed and splashed around the mother manatee, we quietly bobbed alone with our calf.

Eventually it was time to say goodbye though, and when the manatee finally let go and swam away, we decided to call an end to the experience and climbed back into the boat. I’d love to say that, like a scene from Free Willy, our manatee poked her head out of the water and seemed to wink goodbye, or that she splashed her tail above the surface in a sort of manatee wave, but she didn’t. She just disappeared beneath the waves.

Want to swim with manatees? Here’s what you need to know. 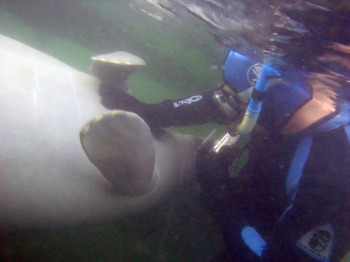 Where and when to do it:
Manatees are found in the Crystal and Homosassa Rivers, which are located in the Crystal River Preserve State Park on the Gulf side of central Florida. The drive takes about 90 minutes from Tampa or Orlando.

You can swim with manatees year round, but be aware that you might not be as lucky as we were in the summer. There are simply fewer manatees in the water during summer, and algae blooms, rain storms, and increased boating activity on the river can make the water murkier and the manatees harder to see. Avoid holiday weekends, especially the 4th of July, if you can. The noise from the fireworks shot off on the river scares the manatees, and they may be more timid for a few days after.

How to book the tour:
There are several companies that offer snorkel experiences on the Crystal and Homosassa Rivers. We went with Captain Mike’s because they seemed to really care about the animals. The Captain Mike who guided our group (there are several Mikes working there – as ours said, “you don’t have to be named Mike to get a job here, but it helps”) was a marine biologist who clearly had a passion for manatee conservation and public education. He was informative and entertaining, pointing out additional wildlife in the area, and offering insights into manatee behavior.

The cost of the 3-hour tour is $50 per person, plus a 2% Manatee Protection Surcharge. Passengers who wish to observe only (not snorkel) pay a reduced fee.

Who can do the snorkel?
There is no age restriction for swimming with manatees. Anyone who can swim can do it. However, manatees do not like lots of noise and splashing, so small children who are easily excited should not be brought on the tour. 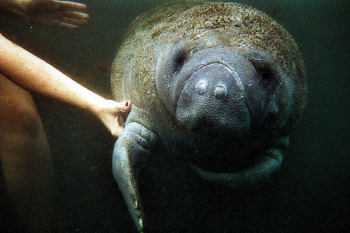 Is it dangerous?
Swimming with manatees does carry some risk – these are, after all, wild animals and the interaction is not staged in any way. But Captain Mike assured us that no one had ever been killed by a manatee. There was a brief moment when I worried Dan’s manatee friend might try to “Tilikum” him, smothering him on the bottom of the river, but she seemed much more intent on cuddling than killing.

Captain Mike did say that sometimes the manatees like to be very playful though. One manatee pulled a swimmer several yards from the boat by grabbing the belt of her lifejacket in its mouth. Another is known for surfacing underneath kayaks and flipping them over.

In most spots, the river is only 4-6 feet deep, and there are no other dangerous animals – sharks, ‘gators or poisonous snakes – that travel so far up the river.

What to bring:
Snorkel gear and a wetsuit is provided. Wear a bathing suit under your clothes and bring a towel and a cover up to throw on after. The river bed is limestone topped with mud, so you may want to bring water shoes, however swimmers are encouraged not to stand up (this makes the water murkier) so these are not necessary. Polarized sunglasses will help you better spot manatees from above the surface.

The rules:
Swimming with and interacting with manatees comes with its own set of rules and regulations, which are strictly enforced by the wildlife commission and tour operators. If you choose to rent a boat and try to find and swim with manatees on your own, you will be held responsible if you break the rules.

You are not allowed to feed the manatees, you can only touch them with one hand (no holding the manatees or preventing them from getting away from you), and boaters must obey all signs regarding idle speed. Captain Mike’s also does not allow swimmers to wear fins or to go under the water. The manatees must choose to interact with you; harassment of a manatee is against the rules and infractions carry big fines – up to $50,000.

The survival of the manatees has been threatened by boaters; Captain Mike said he’d never seen a grown manatee that didn’t have at least one propeller scar. If you run into a manatee that appears sick, injured or threatened in any way, call #FWC on your cell phone.