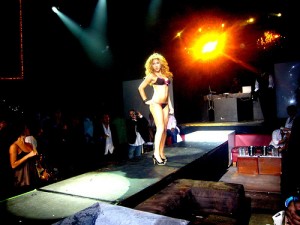 Miami, Florida is known for its spectacular nightlife. Finding something fun to do at night in Miami is never a problem; narrowing it down to just a couple of spots is the hard part! So before embarking on a night on the town in Miami, it helps to familiarize yourself with some of the hottest nightclubs beforehand. This way, you will be able to go out and have the maximum time in Miami without wasting it wandering around trying to find exactly what suits you.

Be sure to check out some of these other Miami Posts:
Best Places to Eat in Miami
Most Popular Clubs in Miami

Mansion – website
If you’re looking for an exclusive, super popular nightclub experience, look no further than Mansion. Mansion, housed in what was originally a movie theater, is considered by many “in the know” to be the hottest nightclub in Miami. Major celebrities and socialites routinely head out to Mansion for their VIP treatment, and to see and be seen. With its Art Deco décor and four rooms of wide varieties of hot music, Mansion is a great option for a fun, A-list night out in Miami.

Prive – website
Another ultra-exclusive nightclub in Miami is Prive. If you ever follow celebrity gossip, you’ve heard of Prive. It boasts four bars with a sprawling dance floor, as well as private alcoves tucked in out of the way places around the dance floor where revelers can sit back and relax.

>>Check out our review of Prive

Opium – website
For a spectacular dining experience, Opium nightclub is a sure winner. This Asian-themed offers a sushi bar, eclectic Asian cuisine, hydraulic tables and exceptional service. No visit to Miami would be complete without taking in club Opium – and its amazing wind tunnel! Feel like getting some fresh air? Step out into the glitzy Opium Garden!

>>Our review of the Opium Gardens

Miamis Nightlife “How To”

As demonstrated by the excellent examples above, Miami is known for its amazing club scene. Locals even refer to it as “Clubland”. And those were just the tip of the iceberg as far as nightclubs in Miami go. There are literally hundreds of places to spend the evening – or part of the evening!

Before heading out for a night on the town in Miami, however, one must keep in mind a couple of things. First of all, no real action gets going until at least 11pm, generally. The hours leading up to 11pm are best spent dining out and primping for the club-hopping extravaganza sure to follow. Unsure of what to wear? Basic black is always a safe bet in Miami.

Earlier in the day, try calling ahead to a couple of clubs and get your name on the guest list. This will makes things far easier for you and your entourage when heading up to the doorman at that hot club later. This strategy won’t always work, but it can help. Also, unless you have at least a few women with you, don’t bother trying to get in to any of the exclusive clubs in Miami; single men are generally turned away at the door.

Don’t limit yourself to bread-and-butter style nightclubs while out in Miami. You’ll really be missing out if you don’t checkout at least a couple of Miami’s hot Latin nightclubs. Owing largely to its huge Hispanic population, Miami boasts some of the best, hottest Latin nightclubs in the world. It is sure to be an experience you won’t soon forget. One excellent example is Bongo’s Cuban Café.

Finally, live music is not a big scene in Miami. DJs tend to be the crowd-pleasers around town, so if you’re looking for a local band to enjoy while sipping a few drinks, you will probably be disappointed. But Miami’s club music scene is so hot, it attracts the most talented young DJs in the world.

No matter where you end up spending your evenings – and early mornings – in Miami, you are sure to have a thrilling, unforgettable experience. There’s never a dull moment in Miami!