Getting from Orlando to Key West 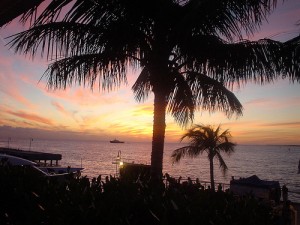 Key West is an island in the Florida Keys and the southernmost city in the continental US. The mild, tropical climate and the variety of things to do and see, recommends it a destination for absolutely everyone. Families with kids have a lot to do here, while couples will definitely enjoy the possibility to spend some time alone, enjoying the weather and the food. The nightlife is also excellent.

Regardless of why you travel from Orlando to Key West (or the other way around), you should know ahead of time the means of transportation available, the time you’ll spend traveling and the ticket prices.

Whether you choose the train and bus or just the bus, the ticket price is about the same (about $96.50* one way ). However, the train only goes to Miami and from there you need to catch a bus. Please note that buses don’t leave on every day of the week so you need to check the schedule in advance (at least during the winter season). Still, flying is more expensive but takes significantly less.

Orlando is served by two airports:

Orlando International Airport (MCO) , located 6 miles from the central business district of Orlando, and it’s where most of the travelers arrive. It is the second busiest airport in Florida, after Miami and is a hub for AirTran Airways. It is also focus city for Southwest Airlines and JetBlue Airways.

Orlando-Sanford International Airport (SFB) offers more international flights from the UK than MCO, but doesn’t offer many domestic flights. It is focus city for Allegiant Air and Direct Air.

Key West is served by Key West International Airport (EYW) , which is located 2 miles from the central business district of the city.

Flights between Orlando and Key West are operated by AirTran Airways. The flight time is 1h 10 min. Regardless of when you travel in 2012, expect to pay from $157 one way on AirTran Airways.

>>read more about Flights to Florida

Orlando to Key West by bus

Greyhound offers buses between Orlando and Key West , with a connection in Miami. The total travel time is between 12 and 13 hours, including the transfer. There are two buses leaving Orlando every day, at 5:30 a.m. and at 9:20 a.m. The advanced purchase fare is $98.00 one way and the web only fare is $96.30 one way. Buses do not depart every day of the week (during the winter season).

You can also choose a shuttle bus between the two cities. There are plenty of companies offering such services and the fares depend on the company and the facilities offered.

Orlando to Key West by train and bus

There isn’t a direct train connection from Orlando to Key West, but you can take the train all the way to Miami and from there catch a bus for the remaining part of the journey.

Orland to Key West by car

You can rent a car and drive the 400 miles between Orlando and Key West. There are two possible routes and both have tolls. The shortest route takes about 7 hours and much of it runs along the coast. But once you get to Key West it’s best to leave the car in the parking lot and get around by renting a bicycle or scooter. Or use the public transport.

Note: *at the time the article was written