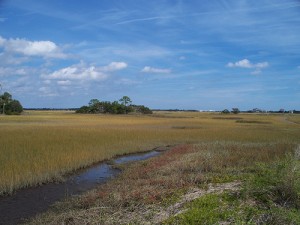 During your visit to beautiful and historic Saint Augustine, make sure to visit Fort Mose, originally the northern defense of the nation’s oldest city. The fort is now part of Fort Mose Historic State Park. It is an important American history site because, according to the official Fort Mose website it is “the birthplace of freedom.” Fort Mose, pronounced “moh-say” was the very first free community of escaped slaves. Founded in 1738, and originally called “Gracia Real de Santa Teresa de Mose.” Conveniently the name was shortened to Fort Mose.

It is a little known fact that, in a little more than one hundred years before Abraham Lincoln’s Emancipation Proclamation, British colony slaves followed the original “Underground Railroad” to the South, not the North. At this time Saint Augustine was part of the Spanish colony of Florida. Slaves that made it there were given their freedom under the conditions that they declared their allegiance to the King of Spain and joined the Catholic Church. When Florida was given to Britain in 1763, all the inhabitants of Fort Mose moved to Cuba.

Unfortunately nothing remains of the fort today, but the marshy site has been listed on the National Register of Historic Places since 1994 because of its importance in American history. The park is located near the St. Augustine City gates on U.S. 1, about two miles north of the Castillo de San Marcos. A boardwalk was built to allow visitors to the park a view of the historic site and the surrounding marshes. A covered pavilion provides a sheltered spot for a picnic. Park visitors can take part in the following activities while at the park: boating, kayaking, canoeing, hiking, walking, viewing the marshes from an overlook on the boardwalk, and bringing pets. Please become familiar with park rules concerning pets, and be aware that the park does not have boat docks.

According to the Fort Mose Historical Society, the society was established in 1996 and “is dedicated to bringing this story to the American people and the people of the world so that it will no longer be a part of our hidden history. We began meeting in 1995, the same year that Fort Mose was declared a National Historic Landmark by the U.S. government. We were incorporated in 1996, and serve as the official Citizens Support Organization for the Florida Park Service, which owns the Fort Mose site. We have sponsored many public programs to increase knowledge of the Fort Mose story, worked to acquire land so that a museum can be built in the area, and we welcome your membership and support as we carry the effort to turn our dream into realty.”

Please call 904-323-2232 to get specific information about Fort Mose Historical State Park, such as directions to the park, park activites, fees (currently $2 per vehicle, and $1 for walkers and bicyclists), park rules, and special events. The Visitors’ Center hours of operation are from 9am to 5pm Thursday through Monday, and the grounds are open to visitors daily from 8 am to sunset.

Two upcoming special events at Fort Mose Historical State Park are first, a “Fort Mose Living History Day” on April 25, 10 am to 3 pm. Activities will show what life was like in 18th Century Fort Mose, including military arts, cooking, crafts, and textile making. Call the Visitors’ Center for more detailed information (904-823-2232). The second special event is a “Guided Bird Walk” on Sunday, May 10, 2009, from 8:30 am to 10:30 am. Some of the birds that may seen include native species such as hawks, owls, storks, egrets, herons, and many others. Again contact the Visitors’ Center for more detailed information. Both of these events are part of Florida’s “Get REAL in Florida State Parks!” program. For your information, the parks address is: Fort Mose Historical State Park, c/o Anastasia State Park 1340A A1A S, Saint Augustine, Florida 32080. Again their phone number is 904-823-2232.

So while vacationing in Saint Augustine, Florida, treat yourself and your family and/or friends to a visit to Fort Mose Historical Park. You will learn a lot about 18th Century American History, and you will have fun while learning.