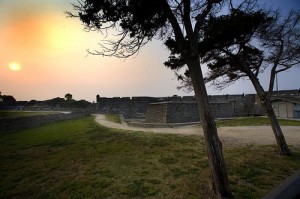 Through the years, the Castillo de San Marcos has served as a military defense structure, for both the Spanish and the United States. Later, it was made into a detainment camp for American Indian prisoners of war. The incarceration of these war prisoners would become a cultural assimilation project led by Richard Henry Pratt, who later founded the Carlisle Indian School. In 1924, the fort was designated as a national monument by president Calvin Coolidge and was turned into a National Park Service attraction in 1933.

The fortress itself is a fascinating building. Only one other fort exists in the world made of coquina, a composition of seashells, which has in part allowed the fort to stand for the 300 plus years it has survived intact. Throughout the fort, visitors can find the various casements and can enter each, viewing the Chapel of St. Mark as well as several rooms that have been re-created in order to give tourists a sense of what life was like for the soldiers and prisoners who dwelt within the Castillo’s walls.

Tourists of the fort can also attend a park ranger program. Throughout the day, park rangers speak with visitors throughout the park and anyone can join one of these interpretive talks at any time. The Castillo de San Marcos also makes available a 25 minute video, which is shown very hour and gives visitors a glimpse into the history of the structure. A well manned bookstore also exists inside the fort, allowing visitors to purchase books, videos, and other souvenirs to document their stay.

Just outside of the Castillo is a recreation area that is populated with green grass and shady trees. Located on the banks of Mantanzas Bay, the green outside of the fort is a beautiful spot for boat watching, picnicking, and relaxation.

Though the Castillo de San Marcos does contain small rooms that can be entered as well as a small bookstore, the attraction is primarily outdoors. Tourists should take the same precautions when visiting the fort as they would for any other outdoor event, such as using sunblock and staying hydrated during hot weather.

Persons with special needs should note that thoug the lower level of the fort is wheelchair accessible, the upper level, where the weapons demonstration takes place, is not.

To truly appreciate the Castillo de San Marcos, the St. Augustine traveller should take the time to study the history of the monument. Several books are available that detail some of the more fascinating events in the history of the Castillo de San Marcos. “War Dance at Fort Marion: Plains Indian War Prisoners” by Brad D. Lookingbill is an account of Kiowa, Comanche, Arapaho, and Cheyenne prisoners who were held at this structure in the late 19th century, which gives a new perspective to the casual visitor to the area. Another excellent read is “The History of Castillo de San Marcos,” a short read about the building and past usage of the fort, including maps and photographs.