Best Rides at The Magic Kingdom 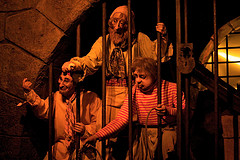 The Magic Kingdom at Walt Disney World in Florida is a Disney park that should not go unvisited. While the other parks are certainly more exciting (unless you are visiting with small children) the Magic Kingdom is the home of Disney. Everyone who visits Disney World should hit the Magic Kingdom at least once – it is the park that embodies everything Walt Disney. However, because many of the rides and attractions are aimed at young audiences, its nice to know (as an adult or teen) which rides are worth waiting in line for. Nothing is more disappointing than standing in line for two hours to spend three minutes on a ride that bores you. All the ride at Magic Kingdom have a special something that hit’s a nostalgic soft spot in everyone’s heart, but they aren’t always worth wasting a day on. Here are the Magic Kingdom rides that are well worth waiting in line for. In no particular order:

Space Mountain
Possibly the most popular ride at the Magic Kingdom, Space Mountain is worth the extreme wait times for. Because everyone at the park wants to ride Space Mountain, this one often has three to four hour wait times. Yes, it sounds pretty rough…but hey, its Space Mountain! The ride is an indoor roller coaster that sends you spinning and twirling through the dark top story of a dome. Riders are put into a seat all by themselves and sent zooming through space.

Thunder Mountain
Another very popular ride at the Magic Kingdom. Thunder Mountain is an outdoor coaster that sends you zipping around ‘mountain sides’ and ‘mines’ and incredible speeds. This ride, along with Splash Mountain, are best visited just before park closing. Because they are located far away from the park entrance, they tend to be less crowded before closing. In fact, on a good day, you might get to ride it five or six times if you go late in the day.

Splash Mountain
This one sends you soaring through tunnels with the grand finale of a giant splash down a huge hill side. This one is certainly not for those who scare easily. Splash Mountain takes your picture just as you plunge into the pool of water at the bottom, which makes for a great souvenir. Splash Mountain is located near Thunder Mountain – making it great to visit late at night because of its location in the park (read about Thunder Mountain above for more info.).

Pirates of the Caribbean
Definitely a ride that is worth the wait. The movie was based on the ride at Walk Disney World. It was recently re constructed to model the movie. Jump into a boat and float through the seas to witness a battle between ships, pirate life onshore, and even catch a glimpse of Captain Sparrow. The newly renovated ride includes numerous life size Jack Sparrows that one would swear are really him. Plus a waterfall that you go splashing down!

The Haunted Mansion
This ride is not for those faint of heart! Just kidding, it isn’t that scary, but quite magnificent. Twist in turn in carts for two to three people through the halls of the Haunted Mansion and get spooked by ghosts, goblins, and ghouls alike. Nearing the end there is a surprise for visitors…just be sure to look into the mirror, you will be in for a ghastly surprise! BOO!

It’s a Small World
Definitely not as exciting as the rest of the rides mentioned, but a classic none the less. it’s a Small World takes you floating through a continental oasis. This might be the oldest ride at Disney and the best ride to take when you’re feet need a break. Because of its slow, relaxing nature, this ride should be saved for when you’re feet and brain are drained from all the other excitement in the park. Small World brings all nationalities and international customs together greeting park visitors from all parts of the world.

Winnie the Pooh
This is a fairly new ride at Magic Kingdom. While not thrilling, its great for everyone. So many generations have grown to love Pooh and his friends thanks the genius mind of A.A. Milne. Like small world and Pirates, you slowly float through an indoor ‘river’ while Pooh and his friends battle the Hephalumps and Woosels. Children love the colors and the characters, while adults are touched by the characters they grew up with and of course, it is quite trippy! Loads of fun, even if it isn’t a coaster.