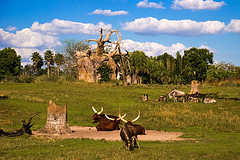 Disney’s 500-acre Animal Kingdom is the newest Disney theme park in Florida themed entirely around animal conservation. Natural-habitat exhibits are home to more than 1,700 animals representing 250 species. The promotion of the nurture and care of these animals is a major objective of the park.

The excitement begins at the Oasis. In this beautiful area of lush fauna and tumbling waterfalls, guests can observe several amazing animals such as the giant anteater, exotic boar, and Hyacinth Macaw. Guests can also explore several different paths leading to fun and excitement and cross the bridge to Discovery Island. Discover Island is the center of the Kingdom where guests can enjoy more animals as well as a variety of adventures. These animals in their natural habitats and the attractions creatively created around them make Animal Kingdom an exciting learning adventure for the entire family.

You will find several major attractions at Disney’s Animal Kingdom. You can explore Africa through the Kilimanjaro Safaris and Pangani Forest Exploration Trail or you can get a good taste of Asia by experiencing the Expedition Everest and the Kali River Rapids. Rafiki’s Planet Watch attractions include Affection Section, Conservation Station, Discovery Island Trails, and Habitat Habit demonstrate the kingdoms commitment to conservation awareness..

Live bands, popular Disney characters and entertainment add to the non-stop fun at Animal Kingdom. Mickey’s Jammin’ Jungle Parade is a part of Disney’s 100 Years of Magic Celebration. Many favorite Disney characters are featured sporting safari gear and driving jazzed up jalopies. The Festival of the Lion King will be a delight to Simba fans and Pocohantas and her Forest Friends echo the park’s theme by expressing the importance of protecting the natural world.

There is also plenty of shopping and dining at the Animal Kingdom. Rainforest Café is one of several favorite eating spots.

The best times to visit the Animal Kingdom would be late August, early September. The weather is particularly favorable during this time period and the crowds are not as heavy.

You may also discover the lowest ticket rates during this time.

For some even better tips, check out our tips from a Disney insider to save you money.

Be sure to check out the other theme parks in Orlando; Sea World, Universal Studios, and the Magic Kingdom.